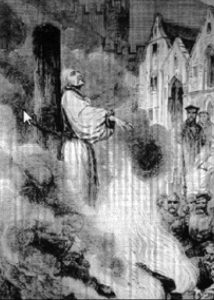 John Foxe’s Book of Martyrs was first published in 1554. It was reprinted several times before his death in 1587. Many printings have followed since then, relating horrible scenes of suffering and death of those who refused to deny their faith in Jesus Christ.

Polycarp is one who “unmoved as if he had suffered nothing, went on cheerfully under the conduct of his guards to the Stadium. The proconsul counseled him to deny Christ, saying: ‘Consider thyself and have pity on thy own great age.’ Then Polycarp with grave respect, beholding all the multitude, answered: ‘Eighty and six years have I served Him and he never once wronged me. How then shall I blaspheme my King who hath saved me? Hear me frankly what I am: I am a Christian.’ Hereupon the proconsul said, “I have wild beasts; I will expose you to them unless you repent… I will tame you with fire.”

The crowd shouted to burn him alive with fire. And so they did, after which the disciples gathered his bones from the pile, “more precious than gold and silver” and put them in a proper place.

Stephen was the first man to die because he was a Christian (Acts chapter 7). Untold thousands of others have known the cost to be high, yet they joyfully remained faithful to the point of death. They shall receive the promised “crown of life” from the King of Glory! (Rev 2:10)