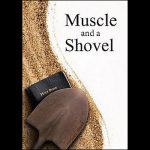 Why would anyone name a book Muscle and a Shovel??

The author had been thinking and writing for 25 years. Michael Shank’s true story began by telling about his talks with Randall, a shipping clerk where they worked. They had chatted with one another for some time. One day Randall asked, “Michael, why are you a Baptist?” After thinking for a moment he answered, “Well that’s what my parents were.” Randall said, “There are a lot of different denominations. Do you know who started your church?” Harold did not know, but said he would ask his pastor.

Next Sunday he asked about who started their church? Answer: “John the Baptist.” That made sense to Michael, so he was anxious to tell Randall. Randall is the sort of a guy that always wanted to “prove all things” by the Bible (I Thes 5:21). Sure enough, Randall said: “What chapter and verse did he give you?” Michael did not feel that was necessary, but said he would ask next week. But was he in for a surprise! The pastor got angry! With his theological degrees he deserved more respect than to be questioned! Now Michael began to wonder about a lot of things. He asked himself: “How much in religion has no proof? And how about the origin of all these other denominations?”

So he began digging. Working to find proofs. In 300 pages he describes his search to “prove all things!” Over 100,000 of his books have been sold to people looking for proofs in religion. I can help you get one.