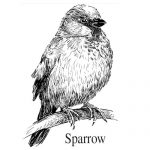 “Are not five sparrows sold for two pennies? And not one of them is forgotten by God” (Lk 12:6).

Sometimes a man’s fare is not cake, but “the bread of affliction” (2 Cor 4:17). In such hours it is well to remember the constant concern a loving Father has for His own. Think of it! Five sparrows for less than a cent! Practically zero value, but Jesus went on to say not one of them is forgotten before God. “Don’t be afraid: you are worth more than many sparrows!”

The beautiful old spiritual song based on this scripture says: “His eye is on the sparrow, and I know He cares for me.”

No one has suffered like God’s own son. In His darkest hour, all the disciples forsook Him. Peter had boasted he would never deny Him, but he did not just once, but three times (Mt 26:69-75). God’s eye was on Peter in that dark hour. Jesus never flinched, because He knew it was for that very hour that he had come (Jn 3:16). And God used Peter mightily later on (Acts 2-10).