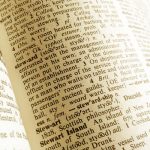 If you are an older Christian, you may remember that old time preaching was mostly from the King James Version of the Bible, translated in 1611. One of the principle duties of the preacher was to read the Bible and then give definitions of words that were no longer familiar. One such word is steward – translated in more modern versions as “manager,” “one entrusted” or “slave.”

In the Old Testament, Abraham had a steward, Eliezer, who was entrusted with the oversight of all his affairs, even including finding a wife for his son Isaac. He was given charge over children as well as his master’s property (cf. Gen 15:2; 24:1-6; 39:4-5; 44:1,4). Kings as well as every household of distinction had a steward in charge. In the New Testament, we find these words in Galatians 4:1-7 where children are said to be under “guardians” or “trustees” until the time set by the father. Although they were heirs of the whole estate, they were “in slavery” to their appointed steward until they reached their mature age. Paul used this example to teach that those under the Old Testament law were not released to receive full rights as sons until Jesus came.

The Bible says there is only one requirement in a steward: he must be found faithful (I Cor 4:1-2). We are entrusted with the gospel, “the secret things of God.” What a tragedy for us as stewards if we do not “handle correctly the word of truth” (2 Tim 2:15).