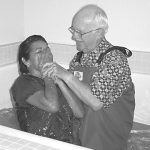 Quite early in Jesus’ ministry a conversation He did hold With Nicodemus who needed instruction, though quite old. He could never see the kingdom of God – its that plain Unless he “of the water and the spirit” be born again.
John 3:3-5

Last words of a man are often thought of great significance Especially when the person dying is of great importance. So the Son of God after He arose from the grave Said, “He who believes and is baptized shall be saved.”
Mark 16:16

The people who had killed Jesus were cut to their heart When on Pentecost they learned they sinned by having a part. They cried out in despair for the forgiveness of their sin And Peter said, “Repent and be baptized” to be forgiven.
Acts 2:37-38

The Ethiopian in charge of their treasury was returning to his land But wondered about a scripture in Isaiah he did not understand. So Philip the preacher ran to catch him so he could explain How immersion in water was essential for salvation in God’s plan.
Acts 8:26-40

The apostle Paul gave his testimony of conversion one day When on the road to persecute Christians in Damascus far away. A bright light struck him blind and being led by his hands To Damascus where he was baptized “to wash away sins.”
Acts 22:1-16

Peter wrote of the salvation of Noah and his family from the flood Who by faith built an ark with exact pattern and kind of wood. The Holy Spirit of God gives us this example in a “figure” Of how God saves us by faith when we are baptized in water.
Genesis 6; I Peter 3:20-21

Since salvation is to be found nowhere but “in Christ” It is of the utmost importance to get into Him and abide. So I searched in my Bible from cover to cover to find the way And read about being “baptized into Him” without delay.
Gal 3:27; Phil 3:9