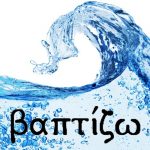 The word in the title is in your Bible, but it is not translated from the original language. All other words are translated into English so their meanings in the original language (Greek) could be understood in our language. But the Greek word baptizo was not translated! The scholars stepped aside from their assigned work of translating and transliterated instead. They spelled out this particular Greek word into letters of the English alphabet.

If the meaning of this Greek word had been given, it would have been “immerse, dip bury, or submerge.” The Greek word rantizo means “to sprinkle,” and the word cheo means “to pour.” These two words were not used with reference to Christ’s teaching about forgiveness and salvation (Mt 28:18-20; Mk 16:15-160)

What explanation can be given for this irregularity in translating the Bible? A review of the history of the practice of “baptism” through the centuries is revealing. For hundreds of years, only immersion was practiced, but by the 14th century the Roman Catholic Church had begun authorizing sprinkling or pouring infants as substitutes for the original practice of immersing believers. The Church of England (Anglican, Episcopal) also adopted this change and King James authorized translators of English Bibles in 1611 to NOT TRANSLATE this word! In order to save embarassment and sell more Bibles, this deception by King James translators continues in most versions of the Bible.

Paper Pulpit book of 391 sermons, $7 post paid while they
last.