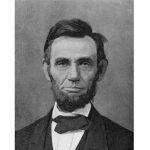 Abraham Lincoln said: “The Bible is the best gift God has given to man. All the good the Savior gave to the world was communicated through this book. But for it we could not know right from wrong. All things most desirable for man’s welfare, here and hereafter, are to be found portrayed in it.”

The Supreme Court of the United States is its highest judicial body. It consists of the Chief Justice and eight Associate Justices. It meets in Washington, D.C. in the Supreme Court Building. It has authority over all the nation.

God’s Supreme Court is the New Testament. What the “Chief Justice” (the Holy Spirit) and eight justices (the writers) wrote in that book are the laws and rules over all the world. Read proofs of this truth in 2 Timothy 3:16-17; 2 Peter 1:3, 20-21. Its 260 chapters comprise the totality of God’s revealed will for the Christian Age (John 16:13).

It’s absolute and final word will stand till the Day of Judgment. Jesus said, “There is a judge for the one who rejects me and does not accept my words, that very word which I spoke will condemn him at the last day. For I did not speak of my own accord, but the Father who sent me commanded me what to say and how to say it.” (John 12:48-49 NIV)

All men will be judged by the Bible, not just those who believe it. For this reason, Jesus commanded that God’s Word be preached to “all creation” (Mk 16:15-16).