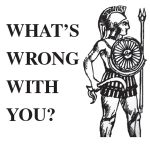 CAN’T YOU GET ALONG WITH ANYBODY? Why can’t you settle down somewhere? You were a leader in school, and after that you were given a seat in an honored council. But then what happened to you? And what happened to your wife? Did she leave you because of your frequent disputes? Is it because you judge only one way to be right, and that everybody else is wrong?

We speak of the apostle Paul. He admitted to having many conflicts. When we first are introduced to him, he helped in the stoning of Stephen. Later he secured authority to find and punish any of that new heretical “Way” known as “Christian” (Acts 11:26). One day on the road to Damascus the course of his life completely changed: he had an encounter with Jesus of Nazareth. Later he was accused of stirring up multitudes in opposition to Jewish law and customs. He defended his controversial ministry in speeches (ex: Acts 22). In a letter he admitted his many conflicts, not only with unbelievers but sometimes with fellow ministers of Christ (2 Cor 11:23ff). Once in Antioch he boldly “resisted Peter to his face” because he sinned and “stood condemned” (Gal 2:1ff).

Some must be on the battlefronts of the world, “fighting the good fight of the faith” (I Tim 6:12), securing beachheads in India, Africa, China, on a remote island of the Pacific…or in America!