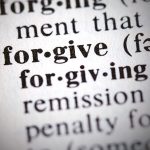 “Peter came to Jesus and asked, how many times shall I forgive my brother when he sins against me? Up to seven times?” This shows Peter had made progress beyond the rabbis who taught forgiveness three times (see Amos 1:4). Forgiveness had been taught by Noah, Jonah, Jeremiah and many others in the Old Testament.

Christ taught one of His longest parables to show the absolute necessity of forgiveness (Mt 18:21-35). He tells about the king who forgave his servant of a huge debt (ten million dollars+-). He could never repay that much. But that servant had a fellow servant who owed him just a few dollars, but he refused forgiveness and had him put in jail until he paid it all. When the report came back to the king, he was furious. He called this servant “wicked” for showing no mercy and had him thrown into prison.

This outrageous story of Jesus stands as a true picture of all who will not forgive others. Even the worst offenses by men against each other are as nothing compared to our offenses against God. Our refusal to forgive some small failure of our fellow-servant cancels our own pardon from God. Those who have been forgiven must forgive.

God remembers our sins NO MORE. They are forgiven by the blood of His Son Jesus. Jesus on the cross said, “Father forgive them …” We must forgive others “seventy times seven!”