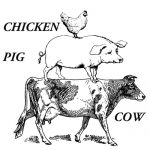 While at Kentucky Fried Chicken for lunch I complimented their wonderful fried chicken! Surprise: The manager will never eat KFC’s specialty! Why? This family is vegetarian, being Hindu. These religions are vegetarian, some strict and others in varying degrees: Buddhism, Hinduism, Jainism, Judaism, Catholicism, Baha’i, Seventh Day Advetism and more. Our focus in the Paper Pulpit is on what God says on the subject as it relates to believers in Jesus Christ. We are not concerned as Christians about what was required during the Mosaic age from 1500 BC until its end at the death of Christ. The record of that age is commonly called the “Old Testament” or the “Law of Moses.” Under that law Jews could only eat from animals that “part the hoof and chew the cud.” (Lev 11:4).

Peter, a man of Jewish heritage was amazed to learn the change for those under the law of Christ! One day he became hungry and “fell into a trance. He saw heaven opened and something like a large sheet being let down to earth by its four corners. It contained all kinds of fourfooted beasts, as well as reptiles of the earth and birds of the air. Then a voice told him, ‘Get up Peter. Kill and eat!’” Peter was reluctant and objected because he had never eaten such unclean things. This happened three times. Read the entire text in Acts 10:9-15 where God pronounced all foods clean if received with thanksgiving.