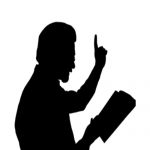 Solomon describes the man who is evil in his lying speech and wicked schemes (Prov 6:16-19). Bible scholars Clarke, Driver, Coffman and others agree that the man who goes about “stirring up dissension among brethren” is perverted and totally out of line with reason. He is an evil person, a liar, murderer, haughty, a deviser of wicked schemes and is a false witness. The obvious conclusion is that such a person will cause trouble among all his associates (vs 19).

The man who preaches the good news of salvation is totally different in his attitude and purpose, even though he expects that some will not receive the truth and may even become hostile to him. Stephen powerfully spoke the truth in love, but his hearers picked up stones and killed him (Acts 7). If you read about the great apostle Paul, you will see he was constantly involved in controversy and debate with those who did not “receive a love for the truth,”but who “had pleasure in unrighteousness” (2 Cor 11:16-33). Jude tells Christians to “contend earnestly for the faith” (vs 3). Letters to Timothy and Titus warn that strong resistance to their preaching must be expected.

The most “divisive” person of all men in the history of the world was Jesus Christ, the “Prince of Peace.” He told His disciples they would see division within their own families and even between marriage partners who had solemnly promised to never leave one another (Mt 10:34-39). God’s gospel divides lovers of truth from all others.