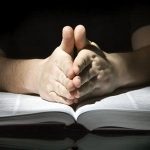 Mormons are not timid about their church’s founder, Joseph Smith. In 1830 at age 14 he claimed he had a miraculous vision from God while he was out in the woods … resulting ten years later in the formation of the Mormon religion. Believers in the Bible deny his claim of having translated golden plates engraved supposedly from ancient Egyptian which resulted in the Book of Mormon. Although Smith claimed the ancient language did not disappear until the English translation was accurate and perfect, it is an undeniable fact that the reprint of the original 1830 version of the Book of Mormon shows hundreds of grammatical and spelling errors, besides fabricated stories. This proves the claims are lies and delusions. Smith also had several wives, further creating doubts that his claims are true. The growth of this false religion, tripling its size over the past 30 years to about 15 million adherents, has attracted the attention of many.

Smith was shot and killed in an Illinois jail where he had been charged with treason (1844). His followers split up and the main group settled in Salt Lake City.