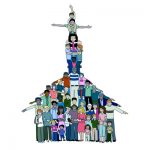 What does the word CHURCH mean to you? The English word “church” is not an accurate translation of the word ekklesia in the New Testament. It meant a “called out group” or an “assembly” of people. Wm. Tyndale properly translated the word in 1525 in his New Testament as “congregation.”

However, monarch King James I, the official head of the Anglican Church and having a vested interest in using the title “church,” commanded his 54 translators to replace Tyndale’s “congregation” with theword“church”in his authorized New Testament in the year 1611. This act laid the foundation for the institutional idea of the word “church.” The word actually came from the Middle English “cheriche” or “chirche” which in turn comes from the Anglo-Saxon “circe” or “cyrce” which is akin to the German “Kirche” or Scotland’s “kirk.” These words are traceable to a different Greek word, “kuriakos,” meaning “belonging to the Lord” (I Cor 11:20; Rev 1:10) where it refers to the “Lord’s Supper” and the “Lord’s Day.”

Webster’s Dictionary states that the Greek word doma (house) must be added to kuriokos in order to make the English word “church” what it has come to mean today – “the Lord’s house,” that is, an edifice consecrated for public worship, an idea that is totally foreign to the New Testament. The original Greek word ekklesia had nothing to do with this modern concept of “church.” Rather it meant “separation from others” (2 Cor 6:17; John 17:14-17 etc).